One of the great things about summer days are the car shows. TD loves them. Me? I'm getting "in" to them slowly. He will zip up to one and spend hours there. I have to admit now that we have Abbey, I do enjoy going to these things more and naturally gravitate towards the older vehicles and especially trucks. I think TD will always have a soft place in his heart for the low and fast cars. We are Yin and Yang that way.
The recent show proved fun. TD went early in his personally owned low and fast beauty, and I went an hour later. The place was packed. It was a huge turn out and was actually pretty neat.
All the low and fast vehicles park together, and the rest just park wherever a spot is open. Meandering through the rows is fun as you never know what is going to be down the aisle.
Anyone who has not been to a car show may not know that often numerous car clubs get together en masse to show off their rides. There are raffles and drawings, information areas about OTHER car shows, and lots of people who just enjoy looking at cars.
It's an enormous tribe and TD belongs.
As we walked through the lanes and he showed me the trucks he had already scoped out, the loud speaker started announcing raffle numbers. TD stopped short and said, "That's MY number!" He had won something!
(It is important to know we never win anything.) 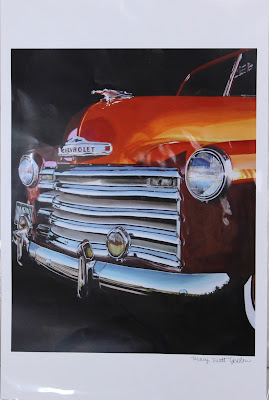 Watching the man check the numbers and nod approval that the ticket we held was indeed valid, we both blinked twice as he handed TD the prize.

Ironically, he won a really neat signed print by artist Mary Watt Yeadon, Called "Old Chevy Truck"  ...a beautiful print of a vintage truck like Abbey.
I take it as a sign.
I must join this tribe.