A while back in post #52 I mentioned that TD bought a Wayne 70 gas pump and planned a restoration. Well it's time for a follow up, because that was SEVEN YEARS ago. (I might be a bit behind with updates to this blog.)  😳

So, this beauty now sits proudly in the Man Cave. I had doubt on the initial purchase but trusted the man when he said it would be great. Update: It is great. Really great.

Because these things weigh about 400-500 lbs., it was disassembled in the garage and pieces reworked in the basement workshop. The frame was taken to a metal guy for powder coating and the panels were taken to the same guy who came out to the house to paint Abbey's dashboard. 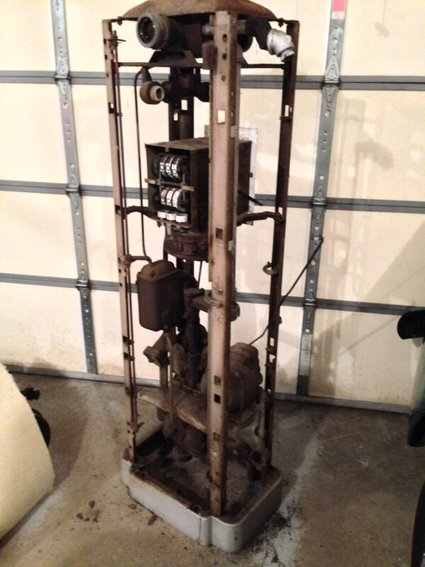 TD got rid of original pump and motor when he gutted it, and bought two refrigerator ice maker motors at a surplus store to run the moving parts. One motor runs the dial mechanism (spinning numbers of gallons and price) and the other runs the propeller in the bulls eye. He drew up some bracket drawings of what he needed to attach everything inside and took them to his sheet metal buddy to cut out and bend up.

Could he have placed a switch inside to turn it on and off? Yes. Did he? No. That wouldn't be realistic because he wanted to be able to squeeze the handle and have the numbers turn and bulls eye spinner spin. After a long search and much pondering, he found a micro switch and wired it all with the switch carefully placed inside a piece of nylon material he carved out and placed in the handle of the nozzle. Squeeze - it starts, let go and it stops. 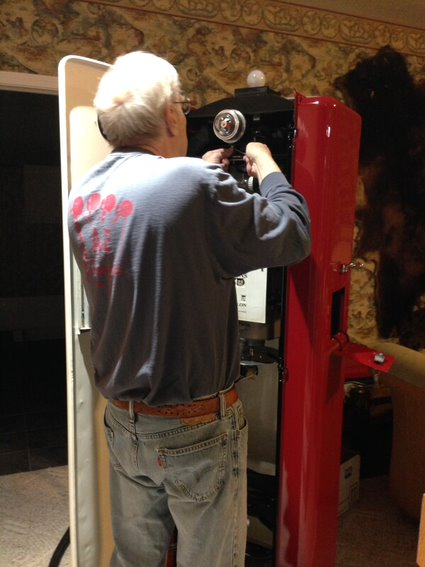 The hose was purchased at Farm and Fleet and is a bit stiff (but if you had hundreds of gallons of gas running through over time, I'm guessing it would relax a bit more.)

As for the globes and decals, TD chose what he liked. When the pieces arrived from a company out in Oregon, one of the brackets to hold the glass panel was manufactured poorly. TD called the company and the owner of the outfit just happened to pick up! He sent out a replacement right away and everything worked out.

For movement ease, TD build a recessed wooden base with casters so the entire pump sits on it, but you don't see it at all. The pump is only about a half inch off the ground but can be rolled around.

I've seen pumps go for as much as $3,500 at auctions so the cost of the purchase plus expenses were worth it... but the priceless part was how much fun TD had working on this fabulous pump.